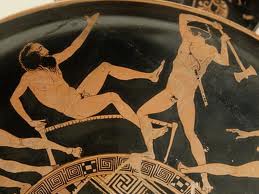 Theseus was the mythical founder-king of Athens, who is perhaps best known as the slayer of the Minotaur. He was raised with his mother in Troezen, apart from both his mortal (Aegus - one of the primordial kings of Athens) and immortal (Poseidon - god of the sea) fathers - it is a popular feature of Greek mythological heroes to have both mortal and immortal parentage. Prior to his returning to Athens, Aegus left instructions for Theseus to also travel to Athens to claim his birthright once he became man enough.

It was Theseus' 'journey of labours' from Troezen to Athens, that is most interesting.

During his travels, Theseus encountered six dangerous adventures, where he had to defeat six different guardians to the entrance of the underworld. After defeating the first five adversaries, Theseus came across Procrustes - another son of Poseidon - who owned a small estate in Attica, where he offered travelers a meal and a 'magic' bed in which to spend the night.

Now, Procrustes is a really interesting character. His promise of a ‘magic’, perfect-sized bed for travelers came with a caveat. The manner in which the bed became perfect was not too agreeable to his visitors, I would suspect. The myth explains that Procrustes - after inviting guests in and feeding them, would offer a bed to each that was purposely - and unknowingly - ill-fitted (he kept both a large and a small bed). He would then proceed to stretch those who were too short for the large bed, and cut off the feet of those who were too tall for the small bed, in order to make them fit into this 'perfect-fitting bed'.

Procrustes, who's name means "he who stretches", continued his reign of terror until he was captured by Theseus on his last battle during his journey, who duly punished Procrustes by fatally adjusting him - by be-heading and amputating him - to fit his own bed.
The myth of Procrustes, and the unique manner in which he treated his guests, is now used in many contemporary forms. Procrustes analysis, Procrustes transformation and Procrustes solution are all mathematical constructs, while a Procrustean string is a computer science concept.

A "Bed of Procrustes" is defined as any arbitrary standard to which conformity is forced, and is also the title of a book of aphorisms by acclaimed author - best known for his best-selling book "The Black Swan" - Nassim Nicholas Taleb. Most of Taleb's writing focuses on problems of randomness and probability, whilst his most recent work's thesis states "we humans, facing limits of knowledge, and things we do not observe, the unseen and the unknown, resolve the tension by squeezing life and the world into crisp commoditized ideas ...".

In essence, he is saying that the metaphor of the bed of Procrustes is about the inverse operation of changing the wrong variable - in this case, the bed instead of the person.  Taleb gives many and various examples through the aphorisms in his book, including the perception of pharmaceutical companies “inventing diseases that match existing drugs, rather than inventing drugs to match existing diseases”.  He writes that “because our minds need to reduce information, we are more likely to try to squeeze a phenomenon into the Procrustean bed...rather than suspend categorization, and make it tangible”.
It is easy to see how the bed of Procrustes can be applied to sport; and in particular, training and program design.  All coaches have their philosophies, and all coaches fit their athletes into these philosophies, no matter how much we profess to ‘individualization’.  The question is not IF we are guilty of compartmentalizing - as our very nature is reductive - but to what depth.  We exist in a constant battle between rationalism and empiricism: we make the error of one, while being bound by the other.
So how can coaches make like Theseus and defeat our beds of Procrustes?