I reviewed the first four coffee shops yesterday...today is the second four.  In case you missed the intro:
Just less than a year ago, I had never had a coffee in my life.  Then I met Steve Hooker.
Olympic champion Hooker, and fellow pole-vaulter, Steve Lewis, introduced me to the world of fine coffee.  Hooker is from Australia, where it seems a ‘flattie’ or a ‘stubbie’ are as popular as the ‘cuppa’ is here in Blighty.
So I was welcomed at the door by flattie, shown inside by tall mach, offered a seat by piccolo, and got real tight with Mr espresso and Mrs ristretto.  My entry into this house was swift...and immutable.
I was here to stay.
10 months later, I’m a coffee snob.  I have yet to taste a Starbucks, a Pret, a Costa, or a Nero, and I never will.  This ‘diluted for the masses’ philosophy is something I generally despise, and something I specifically have no taste for.  Especially in London.  There are FAR too many fabulous independent coffee shops here to ever set foot in one of these mass market dross-houses.
So to all you Starbucks-addicts - what are you thinking?  Take a chance. Try something different.  Maybe somewhere where the barista has a clue how to make a proper coffee.  From a quality bean.  Roasted with expertise in an exceptional roaster.  Ground righteously in a great grinder. And perhaps combined expertly with quality milk.  In cool surroundings.
To help you out, today myself, and two of my roommates - Steve Lewis and Leah Vause - generously agreed to explore the City in search of the best coffee in London.  But there are too many to choose from.  So we just limited our tour to Shoreditch and the City.  Next tour will be the West End, and then perhaps the North.  But for now.  While my eyelids are still caffeine-pried apart Clockwork Orange-style.  Here are the eight that we chose.  That were open.  Part II. 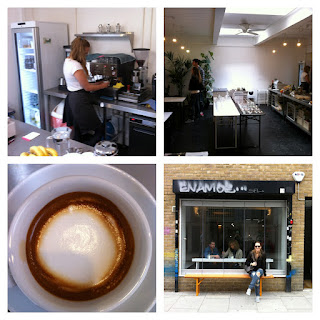 There are a bunch more quality brewhouses in Shoreditch (Nude Espresso, Taylor St Baristas to name two), but unfortunately many were closed, so we ended up going to one that just ‘happened to be there’.
Located on Redchurch Street in between AllPress and The Albion (where we were going to go for a second breakfast, but couldn’t deal with the 6 hour wait), was this weird little shop cum coffee house ‘Cafe and...’. With no sign, and no indication whatsoever that there may be a coffee shop inside, we just sort of stumbled in.  Strange place.  Some cool stuff.  But strange place.  With a strange girl working behind a makeshift counter in the back. That doubled as a coffee bar.
With not a heck of a lot to lose, I ordered an espresso.  They had a small little Gaggia machine, and she did an average job of puling it.  It tasted average.  But it was quick, and it kept me going... 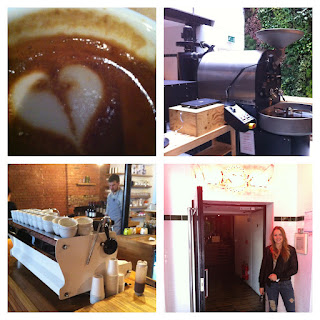 We moved on to Clerkenwell - a couple of tube stops away in between Barbican and Farringdon.  For those of you that haven’t ventured down here, it’s definitely worth the visit.  Known now as the center of London’s design industry (it is thought to have the highest concentration of architects and building professionals in the world), it also is home to many great restaurants (St John is a personal favourite, but there is also Club Gascon, Bistrot Loubet, and The Modern Pantry).
However, the best reason for a visit is undoubtedly one of my favourite coffee shops in the world - Workshop Coffee Company.  Until recently known as St ALi (they were originally partnered with a Melbourne company, but have recently broken away to be fully independent), Workshop serves some of the best coffee around in a space that I would happily live in.  Definitely the best coffee shop to settle down at with a good book. Or to study.  Or write.
They roast their own beans, and use two beautiful machines: a Slayer and a Synesso Cyncra.  The coffee here just doesn’t taste like any coffee I have tried before.  The coffee and the milk combine beautifully, and there’s a perfect finish to each sip - and sip is what you do at Workshop...savoring each patiently.
The space is huge - with three levels, including a full kitchen which pushes out some amazing food, and has a living wall full of plants and flowers, which is pretty cool.  We picked up three bags of the Cult of Done espresso blend, and this will now be our house roast, if you’re ever in our neighborhood... 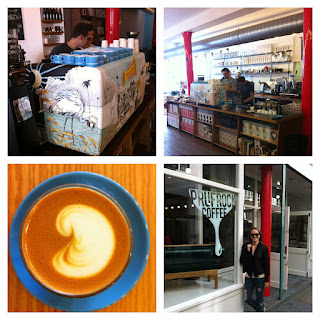 An almost impossible task, but somebody had to follow Workshop, and if there was ever a coffee shop that could, it is Prufrock.  Widely revered as the best coffee shop in London, Prufrock on Leather Lane (a bit of a run-down street in Holborn, which is home to a week-day market) is the mecca for many a London coffee geek.  Opened in 2011, the minimalist-modernist space is the largest of owner Gwilym Davies’ three operations (see previous review of Prufrock in Present). Most coffee aficionados will tell you there are three prerequisites for a great cup of coffee: expertly roasted coffee, top of the line espresso machine, and a skilled barista.  I would add one more: I enjoy coffee more if it is in a sleek and styled room with a comfortable, welcoming atmosphere.  To be fair, most of the independent coffee shops I have been to in London (and I’ve been to many) hit this out of the park.  Its seems the standard is sleek, industrial styling, reclaimed wood, exposed brick, and original floorboards.  I have no problem with this, as it points to my particular taste as well.  But being sleek does not necessarily guarantee comfort.  I like to relax in my coffee shop.  Open up my iPad, and read my Kindle for an hour or two.  And as beautiful as Prufrock is, I just didn’t feel like I could do that there.  Being there felt a bit educational (which was probably not helped by the school-room-like tables and chairs).  That being said, the Prufrock baristas are probably the most educated in London; a sign on the wall points downstairs to BRAT - the Barista Resource and Training Center, where they run hands-on classes on everything coffee - in fact I felt I learned something just by walking in the door (though I will endeavor to take one of their classes, for sure).
So - while the coffee was exceptional, the space super-cool, it’s not my favorite in London.  That title belongs to Workshop, as I know I could easily spend a day there... 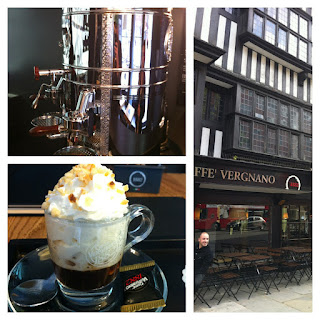 One of four in London, we visited its original location just outside of Charing Cross Tube Station, in the amazing Staple Inn - built in 1545.  One of the few buildings in London to survive the great fire of 1666, the building underwent major reconstruction after being bombed during the second world war.  Apparently what became a pretty beat up little locale was beautifully resurrected by owner Luciano Franchi in 2002.  I can fully appreciate the work, and it looks great - especially from the outside - but Caffe Vergnano is not a coffee shop I could get comfortable in.  I actually prefer their Southbank location, which also houses a restaurant.  But on to the coffee.
The first thing you see when you walk in is the stunning chrome Elektra Belle Epoque QC-1 espresso machine.  A beautiful work of art.  And the drinks (they have dozens of espresso variations - especially at their Southbank location - come on a nice little pewter tray with a glass of water and a piece of dark chocolate; which is much appreciated.  In between these two steps though - where the ‘barista’ actually has to make the coffee - was a major disappointment.  I have had nothing but good experiences at their Southbank cafe, but this was just poor.  It was the last coffee of the day, so I decided to jazz it up a bit and go for one of Caffe Vergnano’s ‘specialties’ - an Espresso Giacometta - basically, an espresso with whipped cream and hazelnuts (I originally was going to go for a chocolate-based drink, but their ‘chocolate machine’ was broken - puzzling, and another disappointment).  The ‘barista’ looked at me a little funny, and had to actually look at the menu to figure out what an espresso giacometta was!  It was fine, but unfortunately, I will not be returning.  It was a bit bitter for my tastes, and after 7 coffees in the previous 3 hours, a tad too strong.
Caffe Vergnano is apparently Gordon Ramsay’s favourite coffee shop, and was named as best espresso in London by The Times, and What’s On Magazine.  Respectfully, I say to these folks:  sorry....but you’re an idiot
The day was done, but my coffee tour is not.  I’m looking forward to visiting some of the places in Shoreditch and the City that I missed, or were closed (Nude, Caravan, Dose, Taylor Street Baristas, and Department of Coffee and Social Affairs), and then reviewing some of the amazing cafes in Soho and Fitzrovia.
Posted by Stuart McMillan at 16:22