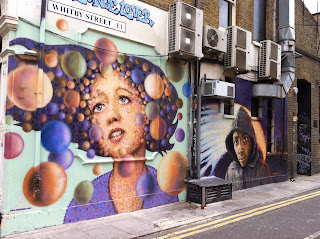 Just less than a year ago, I had never had a coffee in my life.  Then I met Steve Hooker.
Olympic champion Hooker, and fellow pole-vaulter, Steve Lewis, introduced me to the world of fine coffee.  Hooker is from Australia, where it seems a ‘flattie’ or a ‘stubbie’ are as popular as the ‘cuppa’ is here in Blighty.
So I was welcomed at the door by flattie, shown inside by tall mach, offered a seat by piccolo, and got real tight with Mr espresso and Mrs ristretto.  My entry into this house was swift...and immutable.
I was here to stay.
10 months later, I’m a coffee snob.  I have yet to taste a Starbucks, a Pret, a Costa, or a Nero, and I never will.  This ‘diluted for the masses’ philosophy is something I generally despise, and something I specifically have no taste for.  Especially in London.  There are FAR too many fabulous independent coffee shops here to ever set foot in one of these mass market dross-houses.
So to all you Starbucks-addicts - what are you thinking?  Take a chance. Try something different.  Maybe somewhere where the barista has a clue how to make a proper coffee.  From a quality bean.  Roasted with expertise in an exceptional roaster.  Ground righteously in a great grinder. And perhaps combined expertly with quality milk.  In cool surroundings.
To help you out, today myself, and two of my roommates - Steve Lewis and Leah Vause - generously agreed to explore the City in search of the best coffee in London.  But there are too many to choose from.  So we just limited our tour to Shoreditch and the City.  Next tour will be the West End, and then perhaps the North.  But for now.  While my eyelids are still caffeine-pried apart Clockwork Orange-style.  Here are the eight that we chose.  That were open. 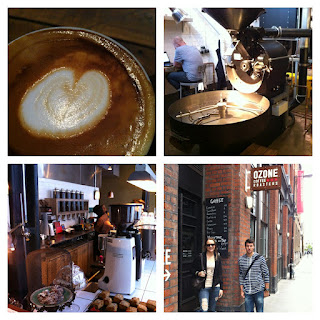 Ozone
We started at the huge Old Street shop for breakfast and a tall macchiato.  Which was bad.  For me.  My breakfast was kedgeree with poached eggs.  Unfortunately, it came all mixed in with a plate-full of rice, which I don’t eat; so I tried my best to separate the eggs and fish from the rice, but ended up paying over £10 for some bits of egg, and a coffee that I was not ready to enjoy, since I had food envy from Leah’s omelette and Steve’s eggs Benny.
But I’ve been to Ozone before, and the coffee is excellent.  They roast their own single-origin offerings expertly on the behemoth classic German 1975 PROBAT machine in the basement, then brew some amazing drinks on their Wega Nova machine.
The design is super-cool, with a nice mixture of booths, benches, and bar-stools where you can watch either the cooks or the baristas work.  And downstairs - besides housing the roaster - is another coffee machine, some more stools and tables, and some of the coolest bathrooms in London - worth the visit alone!  They use Aesop soap and lotion, and even have a pull-chain flusher. 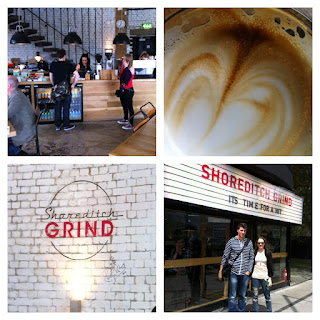 Shoreditch Grind
Just around the corner, on the other side of the Old Street roundabout, is a neat little shop called Shoreditch Grind.  Established in 2011, and located in The Roundhouse Building, the ‘Grind’ brews their own roast on a La Marzocco machine (very popular throughout London independent coffee shops).  I had a really nice, full and rich piccolo.  Creamy, and mellow, it was the perfect follow-up to my Ozone disappointment. 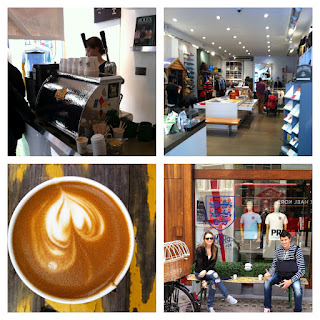 Prufrock in Present
Prufrock has quickly gained a reputation as one of the top - if not THE top - coffee shop in London.  Founder Gwilym Davies won the 2009 World Barista Championships, which I’m sure doesn’t hurt the reputation.  Besides the main shop on Leather Lane, Davies, and partner Jeremy Challender, operate a coffee cart on Columbia Road, and a small concession inside menswear shop on Shoreditch High Street, Present, where we made our third stop of the day.
The menu is real simple: espresso, or espresso with milk.  In 3 sizes.  That’s it.  I had a 4oz with milk, expertly pulled on the coolest machine I saw all day - a La Victoria Arduino Athena Leva.  This work of art uses a large lever system that allows the barista to pre-set the infusion time (ours used 38 seconds).  Great to watch, and even better to drink.  The highlight so far, for sure.  Served in a plastic cup, and sipped while sitting on a pretty precarious park-bench outside the shop.  Watching the cool kids wander by. 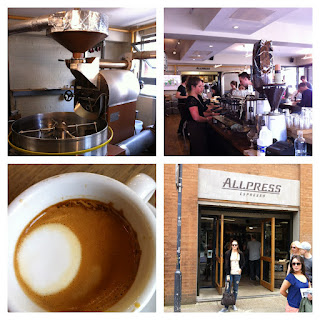 All Press
Recently called the ‘coolest street in London’ by TimeOut magazine, Redchurch Street houses the New Zealand import, All Press, and its giant coffee roaster in the window.  They roast their own blend every Monday and Thursday, and use only Fair-trade coffee bought directly from the grower.  I found the atmosphere to be a little flat, to be honest, and was a little disappointed with my macchiato.  Built a little swiftly and unevenly by the barista (I watched him make a few) on their La Marzocco machine, I found the coffee to be overly bitter, with a strong smokey aftertaste.  They have a pretty big food menu also, but I won’t be venturing back to try it out.

check out the other four tomorrow...

Posted by Stuart McMillan at 15:49