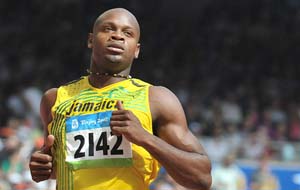 Watched the Oslo Diamond League (otherwise known as the Usain Bolt show - for the second meeting in a row, BBC thought that showing a ‘Bolt Countdown Clock’ was a good idea) on BBC3 tonight, and it got me thinking about choking.  You see, the other big name in the 100m was Asafa Powell who, although running the most sub 10 second 100m races in history, and is a former world record holder, has developed a reputation as a choker.
Real unfortunate for him - though probably deserving.
I will be discussing this topic at far more length in my 500words blog, but thought that this would be an opportune time to write a small primer.
As any high-performing athlete will tell you, optimal performance is normally not a very conscious process; the ‘zone’ is that state of total engagement with your sport, where you are not fully aware of space and time; it is the autopilot of human function.

Choking is the opposite of this process - the athlete gets anxious about performance, becoming self-conscious, and over-scrutinizes what should should be automatic processes and movements.  The golfer over-thinking his swing (think Greg Norman blowing up on the back nine of the 1996 Masters); the tennis player over-analyzing her stroke (think Jana Novotna’s melt-down against Steffi Graff in the 1993 Wimbledon final); and the sprinter monitoring every step are prime examples (Asafa in every Major Championship Final for the past half dozen years).

Research suggests that the reason for this is often that the athlete cares too much; is trying too hard.  They really want to win, and get unravelled by the moment.
There are industries built around helping these athletes, and it’s an extremely complicated scientific process; but in my mind, it can be boiled down to one sentence.
Rekindle the energy that got you into the sport in the first place; re-establish your love of the game - for if this vanishes, all you have left is the fear of losing.

Easier said than done - obviously....but I eagerly await the London Final in just over 50 days, to see if Asafa can finally bury his demons, and walk away with the prize his career deserves.
Posted by Stuart McMillan at 16:40