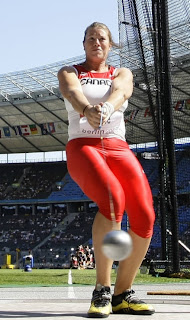 Came across a wonderful quote yesterday that was imbedded in an almost heartbreaking blog post from Canadian hammer thrower, Jennifer Joyce.  Joyce, a former 70m thrower, has represented Canada at the 2005 and 2009 World Championships, and was a 2006 Commonwealth Games Silver Medalist.  Despite enjoying an outstanding career, and holding the Canadian record for much of it, Joyce never managed to compete at an Olympic Games.  Her last shot was this past weekend in Calgary at the Athletics Canada Olympic Trials, where she finished 4th.  She subsequently has announced her retirement on her blog in an emotional piece detailing not only her own career, but the history of women’s hammer in Canada.  I don’t know Jennifer, but I appreciate her words, and thought I’d pass them along, as well as this from Shawn Anchor:
“we are not imprisoned by our circumstances, our setbacks, our history, our mistakes, or even staggering defeats along the way. We are freed by our choices. By scanning for positives, and by rejecting the belief that every down in life leads us only further downward, we give ourselves the greatest power possible: the ability to move up not despite the setbacks, but because of them.”
Posted by Stuart McMillan at 14:54