I gotta live with that...500 words from Lisa Szabon-Smith 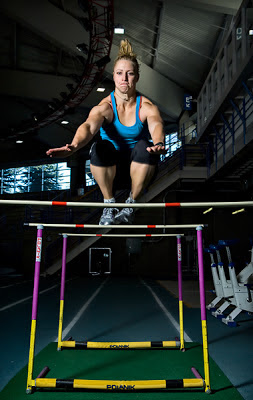 Lisa Szabon-Smith is a pretty talented chick.  Decent athlete (check out her blog, and find out more about her sporting history here).  Not great...decent.  Seems she’s pretty talented at some other things, though. Who knew?

Funny how you become defined by the things you do - or more suitably, the things you show.  Sorta like Freud’s ‘iceberg metaphor’ .  We only show 10% of our true selves - while the other 90% remains hidden from view.  For instance, not many folk know I was a DJ for 20 years.  Or I went to art school. Or I fathered 9 Mexican children.  Go figure...

Similarly, Lisa has recently unearthed all these special talents that were hidden for so long that we’re now surprised by their ‘sudden’ appearance! Like she just woke up one day last week, and was magically an expert graphic designer and writer...

Of course, we know it doesn’t quite happen that way.  And since we’ve heard from Lisa before, we knew (at least since last July) that she could write (in fact, her post is the second-most read on mcmillanspeed history).  So I asked her to write another one.

Last week, Olympic Gold Medalist, Classroom Champions founder, business consultant, and another all-round talented dude, Steve Mesler, shared his thoughts on Lance Armstrong.  I have invited Lisa to do the same. And then...

...no more Lance.  Like Junior Byles said “he who seeks of only vanity...shall fade away...fade away”...into the ether...
Never to be heard from. Spoken of. Or thought about.
Ever again.
(yeh right...)

“I Gotta Live with That” - Lisa Szabon:
(Stu originally set up his blog to be 500 words or less, so this perpetual rambler has
challenged herself to do just that. 500 word response to a black cloud that hovers over
not just the cycling world, but every athletic world...)

“I gotta live with that”: Five words that trickled from Lance Armstrong’s lips as he shared with Oprah what 99% of the world already knew to exist.

These are words I have chosen to think about before making any choice in my life:

Can I live with this?

Can I continue to live my life with the step I am taking right now? If I even falter at answering YES then I hope to the heavens I will stop.

I’m a clean athlete. I even refused Creatine for the lack of long-term knowledge on what the increased intake (additional to that of which my body naturally produces) would do to me. The most I supplemented with was protein and a one-time ingestion of Beta Alanine -of which the physical reaction from was enough for me to say “this is not for me.”

I chose to be among the strongest females, third fastest female pilots (in a physical sense) and powerful athletes of the Canadian program at the time of my involvement with terms that I could live with.

There is no secret that there is cheating, banned substance ingestion, doping and many other unethical and down right inappropriate behaviors that happen in the world of sport. Cycling is not immune. Bobsleigh is not immune. Track and Field is not immune. No doubt swimming is not immune. We are all human and we make mistakes but are they mistakes that we can live with?

Despite being human and prone to making mistakes, we are still given the foundations and the ability to make choices; the right choices hopefully.

But at what cost?

Are we in a society that is so desperate to be number one that we make choices that 5, 10 years down the road we may never be able to look ourselves in the mirror again? At what level of desperation do we go forth and become frauds?

It seems to me that almost every person I have heard of, watched, or read about in regards to doping/cheating was already an amazing athlete before they began to dope. So what changed?

What made this already powerful and talented athlete think, “If I take this banned substance - that I know is wrong - I’ll be #1”. Do they forget that there are always repercussions when dancing with the Devil?

Call me naïve or perhaps too grounded for ultimate success (after all, I missed out at going to the Olympics) but I’d rather know I missed the podium because I made a choice I can live with; not one that brought me a title that, in reality, 10 to 15 years later will be forgotten.

Because after all, I gotta live with that.