I had the good fortune of coaching Steve Mesler for eight years.  Beginning in 2002 at the Salt Lake City Olympic Games, and stretching through two more Olympic quadrennials, culminating in an Olympic Gold Medal in Whistler, 2010, Steve epitomized everything a coach could want from an athlete.  He was professional.  He worked hard.  He was focussed.  Disciplined. Dedicated.  An enthusiastic and supportive teammate.  And he was honest.  He understood the use of performance enhancing drugs in sport.  In his sport.  We all did.  There was no denying that drug use in sport was (and still is) a problem.  It’s not as bad in winter Olympic sport, as it is in some summer and professional sports - but it was still an issue.  But Steve was never tempted.  He enjoyed sport too much.  He enjoyed the training too much.  The 6am wake-up calls.  The 6 hour practice sessions.  The warming up in -30 degrees in the snow.  The friendships.  The rivalries. The competing.  The winning.  And most of all, he understood how little any of this would have meant had he used drugs.

I asked Steve if he could share some of his thoughts on a certain former seven-time Tour de France winner.  Over the last week or so, we’ve heard from a few athletes in radio, TV, and print interviews regarding their thoughts.  Most detail that they think they should lock him up and throw away the key.  That he cheated not only his teammates, but the sport.  Steve takes a slightly different view.
He cheated himself...

"I can remember sitting in a doctor’s office in Calgary one afternoon in 2007. It was a summer day and my team was right in the middle of a big training block. I was going into year two of my third Olympic quadrennial. I was tired all the time. I was sore all the time. I was hungry…all the time. And on this particular day, I was feeling a bit sick.

As I was waiting in one of the waiting rooms, the doctor walked in. He was a young guy -mid-30s I’d say, and always in tremendous shape - I knew him well. We started chatting about training and how things were going, and I spoke about how run-down I was feeling. He started talking about a new workout regime he had started and shared that he was using Human Growth Hormone (HGH) to supplement his training; and he was “feeling amazing.” He talked about a patient he had, who was in his mid-40’s, that was using HGH as well – you know, because he was aging and was deficient, so supplementing him with HGH was safe and healthy.

I never did have anyone specifically tell me to take performance-enhancing drugs or explicitly offer them to me.  But it’s subtle situations like I just described how people let you know they can be “your guy.”

Everybody wants to be somebody’s “guy.”

And it happens just that simply. Some athlete says, “You know, I’ve always thought about trying that…” and away goes the conversation down the rabbit hole.

But I made a decision that day to change the subject.

I knew what cheating meant and in 2007, after having been to two Olympic Games and coming away empty handed, I knew that I wanted to do it the right way no matter what. Being able to hold my head high when I walked into a room was something that I consciously thought of and made decisions based upon.
So it’s with those decisions in my past that I have the right to talk about how I feel about Lance Armstrong. Any athlete that did it the right way has that right. I stepped to the top of an Olympic Podium and screamed, smiled and cried all at the same time. Just a few hours earlier, as Curt Tomasevicz, Justin Olsen, Steve Holcomb and I crossed the line my mind wandered to the experiences that brought me to that moment and I smiled at where I came from.

I often wonder what people like Lance Armstrong have going on deep inside their minds when they experience those moments of victory. They have worked hard, cheating or not - there’s no arguing that - but is there a place in their psyche that is filled with self loathing from guilt?
Or is the psychosis that what they did was ‘ok’ set in so deep that it doesn’t even cross their minds?
Lance isn’t sad or ashamed of having cheated. Lance is sad and ashamed because he got caught. Because getting caught means he’s not perfect. He’s flawed.
It should be the other way around, but it just doesn’t seem to be.
A lot of people have asked me how I feel about Lance Armstrong.
My answer is a simple one...a four letter word – I feel pity. Unending pity that such a tremendous athlete could rob himself of such an amazing feeling all because he didn’t have the foresight to decide to change the subject in some office, somewhere, when someone, wanted to be “his guy.” 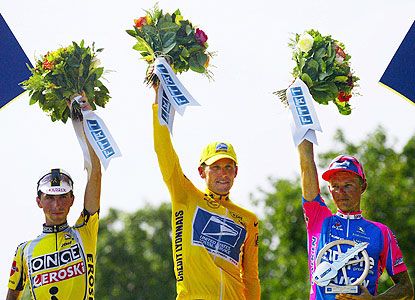 Steve wrote a guest post back in July of 2012 on potential pitfalls of the post-sporting career.  You can read it here.

Posted by Stuart McMillan at 03:28