why athletes should do yoga: a guest-post from Ellie Coats... 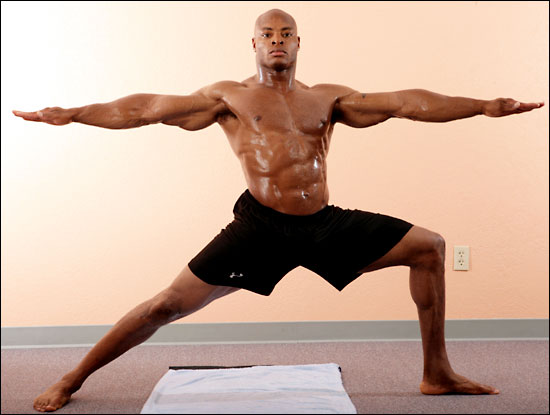 I’ll be honest...I have absolutely no clue how this post will be received.

I have been wanting to post some thoughts on the purported benefits of yoga for athletes for a while, and when I read this one from Ellie Coats - a yoga practitioner in Cambridge, in the UK,  it fit the bill perfectly. It also proposes a couple of unique things that I had not thought of before, so I thought I would share it here.

I have personally ‘practiced’ (as that is what we are supposed to say, right?) yoga for 12 years or so.  And I still really suck.  In fact, I think I’m probably worse than when I started.  I got the breathing down pretty good....but the rest of it?  This old body just doesn’t move that way.  A few weeks ago, I figured I’d try it in the heat, so went along to a Bikram session...thought the added humidity, and the 110 degree heat would somehow, magically allow my body to move in ways not seen in a few decades.

Nope.  Not even close.

So while my own yoga career has never really lifted off (sort of like my track career), I have always espoused the benefits of it to my athletes, and have at times even included it in my programming.  It remains to this day a part of each training session’s warm-up.

Folks on the east side of the Atlantic may be scratching their heads right now.  Yoga?  For athletes?  C’mon...

On this side of the Atlantic though, it’s not so uncommon.  I’m sure by now a majority of athletes in the States and Canada have at least tried it (and secretly most of them might even admit to enjoying it).

And if you haven’t?  I encourage you to give it a go.  At the very least, you had a fun hour enjoying exploring your ridiculousness (at least that is how it feels when compared to some of the 100lb yogis that frequent the classes).  Like Ellie said to me in a recent message - we’ve got to get past the pre-existing view of yoga as something that middle-aged women do in church halls to get flexible and breathe....

Yoga as a method of cross-training for athletes brings with it improved range of motion, balance and a quietened mind. Here I will discuss some aspects of yoga practice and what benefits it can bring to an athletic training programme.

In a vinyasa flow class, we link poses together into a sequence, moving from one to the next with either an inhalation or an exhalation. To begin each class, we normally do a form of sun salutation (“surya namaskar” in Sanskrit). A standard Astanga-style sun salutation warms the spine up in the sagittal plane with a series of forward and backward movements. This then proceeds to a more advanced style of surya namaskar where a step forwards is taken and the spine must begin to move in both the frontal and transverse planes. Progressing into standing poses, different asanas will improve the range of motion and proprioception at different joints. Standing prepares you for sitting, and when you sit the range of motion required at the hip joints substantially increases, so we ease our way in through lunges of various forms. We also practice backbending, arm balancing, and inversions like headstand and shoulderstand, all of which bring their own benefits to the body.

Asana/postures are best viewed in terms of the spine and the benefits it enjoys from being moved into these different positions, increasing its range of motion and proprioception. One definition of yoga is a practice which lengthens the spine. If the spine is long, free and functioning well, then the body as a whole is likely to be functioning well. 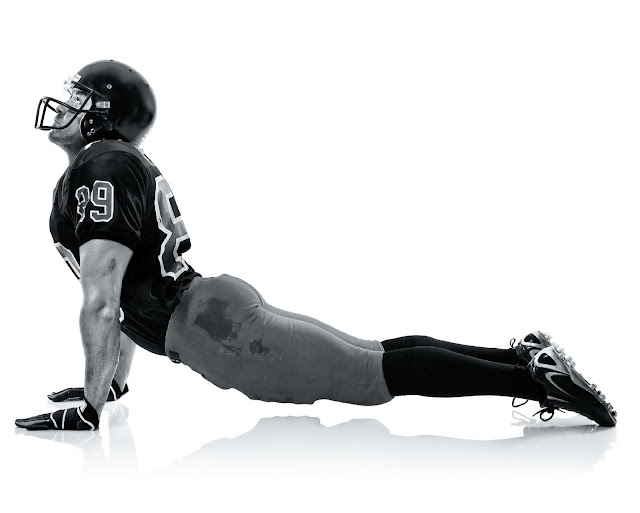 As a method of cross-training, I have observed two major benefits of yoga practice.

1. Yoga can help ensure that an athlete’s base level flexibility does not decrease with the demands of their training programme. Indeed with regular practice it can vastly improve range of joint motion throughout the body. There are a couple of particular advantages to this:

2. As a further tool in the injury prevention arsenal. A good yoga practice encourages balance between left and right so that, when at rest, your centre of gravity is as close to the middle of your base of support as possible. This is a particular issue in sweep rowing, an inherently asymmetrical sport where one leg will often load more strongly than the other, in time pushing the perceived centre of gravity well away from true centre. Pain and injury can then manifest further up the fascial trains as a result of uneven tension distribution, rib injuries being one of the most unpleasant consequences. (If injuries to the ribs and their surrounding fascia do occur, a group yoga class is unlikely to be safe for the patient and appropriate one-on-one treatment becomes necessary. Group yoga sessions should be considered as conditioning rather than therapy).

In a yoga asana practice we move in and out of what is called the “transition zone”, testing the edges of where we and our joints and fascia can safely reach. This is true whether we are working with static held postures or flowing through a vinyasa. “A transition zone can . . . be described as the zone when a muscle/fascial chain has come to the end of its eccentric loading phase and is switching into its concentric contraction.” (again from Ed)

Moving through a series of postures, we ask a joint, or joints, to explore the end range of their motion and with time improve proprioception at the edges of that range, and also test its function whilst working in couples with other joints. Then in time it gradually becomes more and more comfortable for e.g. the hip to deeply externally rotate. First perhaps gently whilst standing with an extended knee, then standing with a flexed knee and a rotated spine, then sitting - maybe initially on blocks, then whilst balancing on your hands with a flexed spine so as to challenge the body’s standard perception of its base of support.

All of this can be taught one pose at a time, allowing for a deeper settling in over the course of several breaths, or you can ‘flow’ from pose to pose, vinyasa style. At the highest level of this practice, as you move towards the edge of your range of motion in one pose, the fascia which has been eccentrically loading will switch to concentric contraction and depending on where you place your gaze (or your breath), the body flows into another shape and towards another edge where other muscles will reach the end of their loading capacity and send you onwards, encouraging the “perpetual movement situation” sought by rowers or the “flow” we often talk about in yoga classes. This requires practice and patience to achieve, but the benefits of retaining and not wasting energy via this method of movement are many.

A nice and reasonably simple example of flowing through a vinyasa from edge to edge can be found in the transition of standing straight-legged with lifted arms (urdhva hastasana) to folding down into a standing forward bend (uttanasana). I am assuming no conscious concentric contraction - i.e. no pulled up thighs, no cinched-in core etc*, just relaxed body weight through both feet - and we will simplify the movements and remove the raised arms. By lifting the sternum upwards (not backwards), the front body will lengthen, specifically the superficial front line and the deep front line. Initially the front body extension will create a smooth curve through the front of the body and down into the thighs, with extended hip flexors. As you reach the end range of your sternum lift (and this will depend on your flexibility and the condition of your fascia), the deep front line will come to the end point of its eccentric contraction - its transition zone or its edge - and will start to concentrically contract, shortening the hip flexors and pulling your front body in on itself until you find yourself in a forward bend.

Not everyone will feel this automatic transition to start with. It may need some time to open the body and create sufficient sensitivity that the transition zone can be both explored and experienced. Initially in this example you may feel it as a softening or drop downwards behind your navel, but it may not have sufficient power to bring you forward. With time however, a smoothness of flow encourages the switching off of the chatter of the mind, bringing you fully into your body.

In this article, I have discussed the role of yoga as I have experienced it within an athletic training programme; that it can have an impact on whether you can get into the positions your sport requires of you and can decrease the likelihood of injuries experienced by athletes. Looking deeper, we can begin to explore the transition zone of fascia and the proprioception at joints, leading to a greater understanding of our own body’s function and capabilities - and possibilities - taking us to a space where we can move with ease whilst conserving energy.

Finally, and most fundamentally, a yoga practice is at its best when it is fun and enjoyable - a session where you get to turn yourself upside down and balance on your head, or your hands and laugh when you reach that point just a fraction beyond your current edge and you fall over. There is a freedom to this kind of practice which can offer a relief within an intense training programme and a time to wind down and take a breath.

* I was first introduced to the concept of not consciously concentrically contracting muscles by Anatomy in Motion founder Gary Ward. By using an electronic foot scanner which measures your body’s sway in every direction whilst standing on a pressure pad, he was very quickly able to show me that we are much more unstable standing classical Tadasana style with pulled up legs, core etc. than simply standing relaxed on two feet with slightly flexed knees in a Qi Gong or a Tai Chi-style stance. 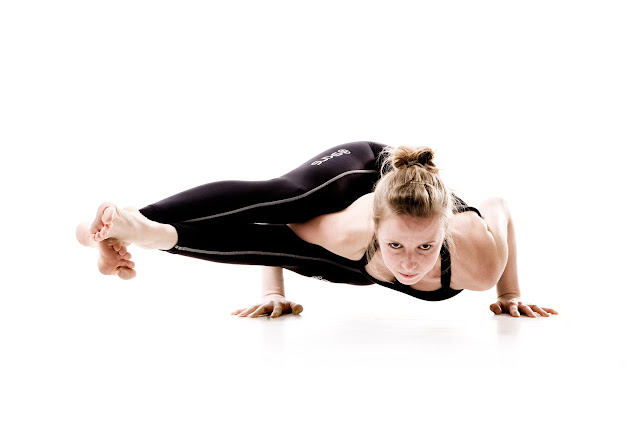 Ellie Coats is a yoga teacher, shiatsu practitioner and anatomy in motion (AiM) practitioner. She has worked with Cambridge University Lightweight Rowing Club for the past five seasons and taught yoga to Sophie Hosking (Olympic gold, lightweight women’s double sculls, London 2012), Steph Cullen and Imogen Walsh (both World Championship gold, lightweight women’s quad, Bled 2011) and their coach Paul Reedy from 2009. Ellie has had success with both injury prevention and treatment using all three practices she is trained in and, working in collaboration with coach John Thicknes, has developed methods which have helped ensure that there have been no significant injuries at CULRC for at least the past 3 seasons. You can reach Ellie at www.elliesyoga.co.uk, and give her a follow on Twitter at @Elliesyoga

Posted by Stuart McMillan at 22:22