The Games have been over for a few days now - my plan was always to give a pretty thorough debrief of my experience - alas, the sport got in the way, and I was unable to write as much as I could.  Instead, I will share some brief thoughts on the Games - from highlights to lowlights.


“The Jamaican Bobsled Team
...just may be the biggest scam in the Winter Olympics”

This is a quote of former bobsled and skeleton coach Greg Sand.  Pretty controversial.  But almost just as surely correct.  The reality is this ‘team’ is still living off of the hype of ‘Cool Runnings’ - the gateway for 99% of the public’s experience with bobsled.  Which is fine, by the way - 2010 Olympic Gold medallist in bobsled Steve Mesler has the following to say in regards to this:

"Do you know the Jamaicans?" is the inevitable question every bobsledder has been asked since the dawn of time. Or at least since 1994. ‘Cool Runnings’ and the popularity given to the Jamaican bobsledders is the bane of all bobsledders' existence. Everyone knows ‘Cool Runnings’; no one knows who any of the Olympic gold medalists are from that same period.

This is the rant that goes through most bobsledders heads. But it's ridiculous because here's the thing - without ‘Cool Runnings’ and the 95% of countries that are non-bobsled-fan nations (which is everywhere except possibly Germany, Switzerland, and Russia) no one would know what the sport even is! ‘Cool Runnings’ breathed life into an overpriced sport years ago and continues to be the best PR machine possible.

Sometimes I forget this. Then, when I least expect it, I'm reminded what Disney did for us all those years ago. In September of 2013 I was visiting a school in the middle of the San Jose slums in Costa Rica. Myself and the Executive Director from a foundation toured the school and then met with about 40 students. He translated everything I said and when it came time to describe bobsled to the 12 year olds, their faces went blank. They new Olympic gold, but not bobsled. Amidst the spanish being spoken, all of a sudden I recognized two words that brought smiles, understanding, and amazement to the kids' faces.

Those two words were ‘Cool Runnings’.”

The flip-side is that it is no longer 1994.  The 2014 fairytale involves a bobsled-as-a-hobby, Wisconsin-living, 46 year-old salesman, who’s main motivation appears financial.  After public donations of somewhere between $200,000 and $300,000, and a sponsorship from Samsung Mobile, the Jamaicans showed up in Sochi in a beat-up old sled and a volunteer coach, and were bartering for borrowed runners right up until the day before the race.  In which they finished dead last.  By a large margin.  What’s the point?

Or maybe I’m just a hater.  A hater that sees hundreds - thousands - of serious athletes, seriously training, making serious sacrifices in pursuit of their dream.  Almost none making it.  Almost all going into debt.

In the shadows of the hustler...

It seems that the entire population of Sochi was brought in to volunteer for these Games.  I’d say probably 5 times as many as they actually needed!  Shame that none of them were actually trained.  Although they have been incredibly pleasant, and tried to help in any situation - they simply were not given any information at all.  On anything.  On the whole though, these almost exclusively young people have gone out of their way to ensure that all the athletes, coaches, and staff have had a positive experience.  Very interesting when you compare this group to the paid staff - the housekeepers, maintenance workers, and cleaners.  Generally over 40, these folk are what you may conjure up in your mind when you think of the ‘typical Russian’ - sad, grey, hope-less.

The pride of the young was especially evident during the Opening Ceremony - I watched on TV with many of the Coastal Village volunteers.  Each time a Russian athlete came into screen, there was screaming and stomping of feet. Obviously desperate to portray their country in a positive light to the world, there was hardly a dry eye in the place as they rushed from in front of the giant screen TV to the window to watch the fireworks and back again...

The Olympics are for the best athletes in the world.  If you are not one of them, then you should not be there.  I understand that IFs and the IOC are trying to spread the popularity of certain sports throughout the world - but in my mind, this is the responsibility of the National Federations - sort out your own houses first, begin competing on a World Level, and then - if you’re good enough - you can go to an Olympic Games.  Yes - this means that Jamaica should not have been here.  Nor should Vanessa Mae.  Nor should the Mexican skier (despite his pretty cool mariachi ski suit).  And nor should have the Brazilian bobsled team.  If the IOC do not change their views here, it is only a matter of time before we see another tragic event like the death of Georgian luge athlete Nodar Kumaritashvili in Whistler in 2010.

X Games events are fun, but they're not Olympic.

I blogged about this last week.  The Olympic Village resembled more of a skate park than a high-performance athlete Village.  And like I said in my post, I have nothing against these kids - I enjoy watching their events - but this is the Olympic Games.  And for me, they should be a celebration of the world’s greatest athletes.  These kids simply are not.

Apparently, skiing on rails is a sport, but wrestling is not...really IOC?

...is this Olympic?
(these are two Olympic athletes training in the Mountain Village weight room - believe it or not, this was not unusual...)

The Canadian bobsled coaches haven’t been reading my posts, apparently.  48 hours before the beginning of the 4man Competition, they decided to change crews around.  Apparently believing Justin Kripps to have a better shot in the race than Chris Spring, the coaches flipped crews.  Even though Spring was the higher-ranking pilot (5th in the World Cup overall rankings for the season).  Even though Kripps was in his first Olympic Games as a pilot, and was a long-shot at best for a 4man medal (this is no affront on Kripps - the 4man field was incredibly deep, and Kripps has yet to win a World Cup 4man medal - in fact, he is yet to break into the top 7 - so to expect him to win one at the Games was always going to be a tough ask).  Kripps performed well in 2man - holding strong in 4th place until a poor final run pushed him back to 6th.

Needless to say, this move did not work out well.  But it led to one of the memorable moments of the Games.  Kripps crashed in his second run.  The walk up to the sled take-out was greeted with thunderous applause.  Two of his crewmen were unable to continue the following day.  So the two Alternates now took their place alongside Kripps, and Jesse Lumsden.  Two alternates that now were legitimate Olympians.  Once again, they were the fastest starting Canadian crew. Once again they were given a standing ovation at the end of the run.  Even by all on the Starting Dock, watching on the monitor.  Heroic stuff.

I answered that it was highly doubtful...but it is a fair question

There are three Villages - the Coastal, the Mountain, and the Endurance.  For the first week - before competition started for the sliding sports, and before any of the hockey players arrived - we stayed in the Coastal.  I had a 1200 sq ft penthouse apartment to myself, with a spiral staircase up to a rooftop terrace overlooking the Black Sea.  The remainder of the time, I shared a 150 sq ft room with one of our therapists.

You can guess which Village I preferred!

The Mountain Village is stunning, though.  Nestled within the Caucasus Mountains with amazing 360 degree views, it is truly a breathtaking place - the big question on everyone’s minds is what will happen to the Village once we all leave.  We all hope it remains - it will be a wonderful vacation venue for Russian snow sport lovers.

The Coastal Village is really quite a nice little apartment-town home community, along the coast of the Black Sea.  It is first class, and will be an amazing place to live.

The Mountain Village wasn’t quite finished.  It seems the concrete was probably poured the week before we got there - as most of it had completely fallen apart by the time we left.  No landscaping was complete - a fact made increasingly obvious as all of the snow melted away - revealing piles of dirt, mud, stones, and rock. 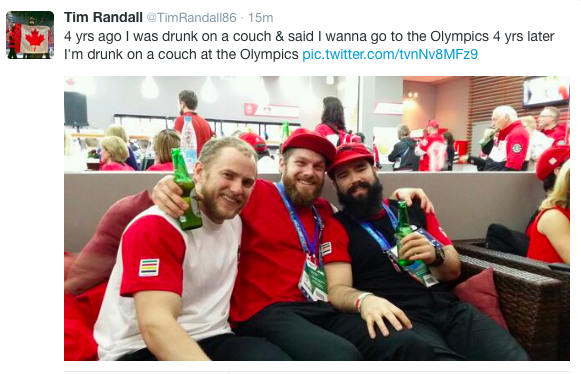 The transportation started as a complete nightmare.  And ended up just being slightly annoying slash funny.  Whether it got better, or I just got tired, I don't really know...

There was a ton of pre-Games hype about supposed security risks.  It honestly never entered my mind once I arrived.  The Sochi Security was tight.  Never felt safer.

#SochiProblems was a pretty funny hashtag.  At first.  Like most trends, it got pretty old quickly...but here is one of my favorites: 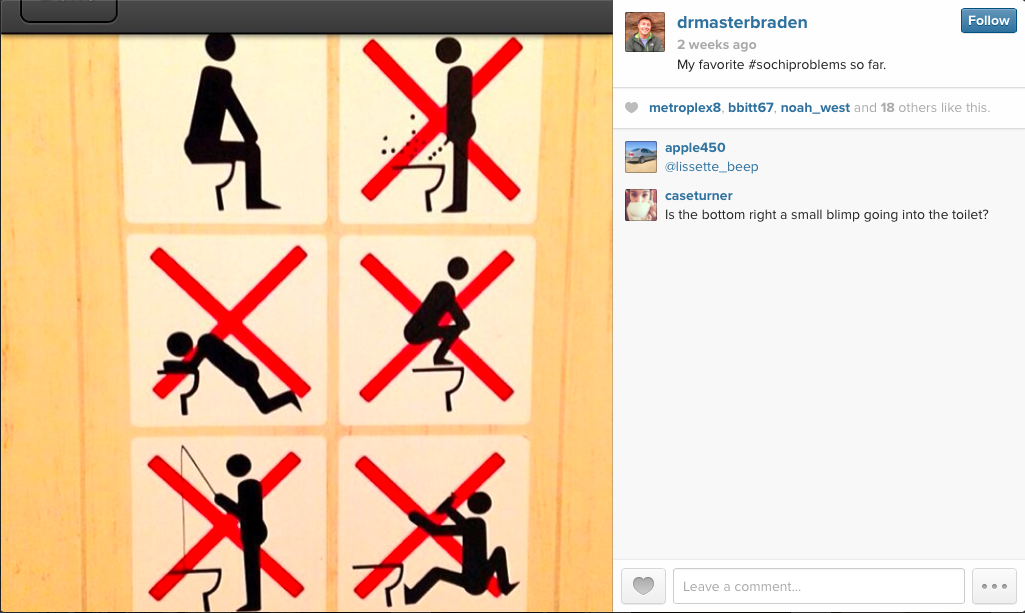 ...another trend was the #SochiSelfie...I took one, with John Daly: 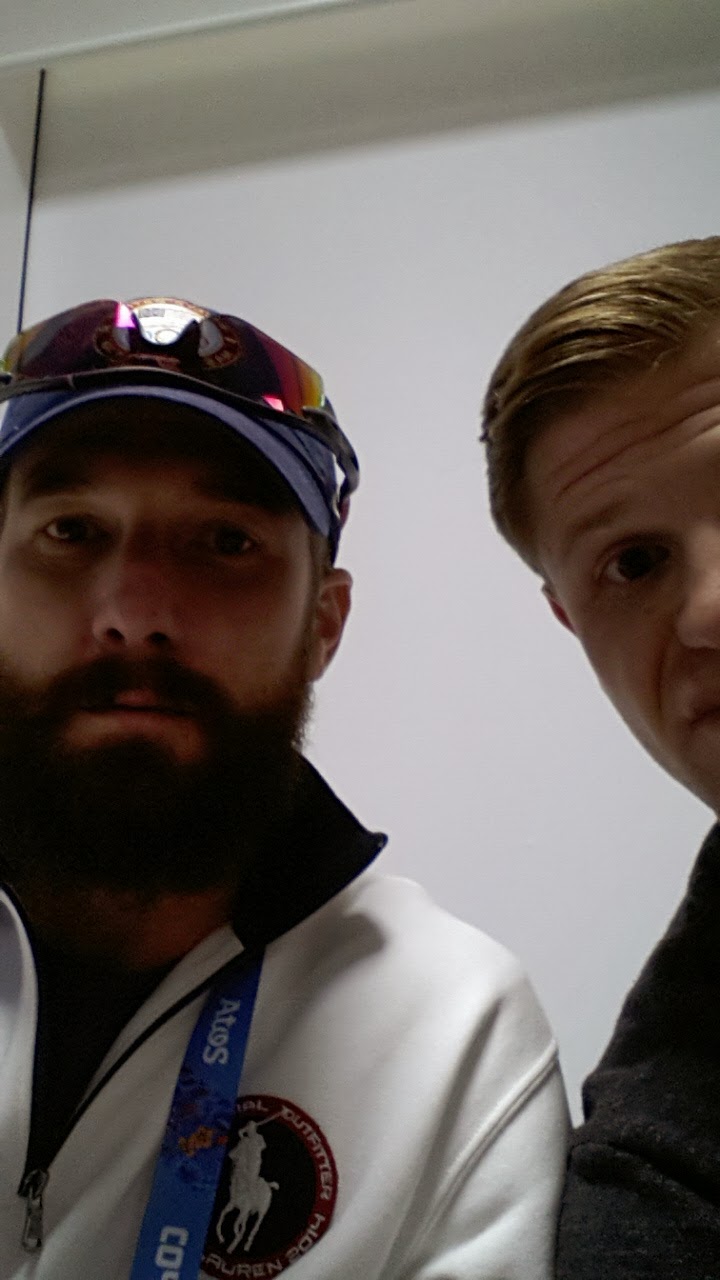 Some other highlights / memorable moments:


In conclusion, I was pleasantly surprised by Sochi, Russia, the Games, and the relatively smooth manner in which everything bounced along.  The weather was unbelievable.  The people were cool.  And the region rivals Vancouver-Whistler.  Truly Sea-Sky...

Posted by Stuart McMillan at 02:38