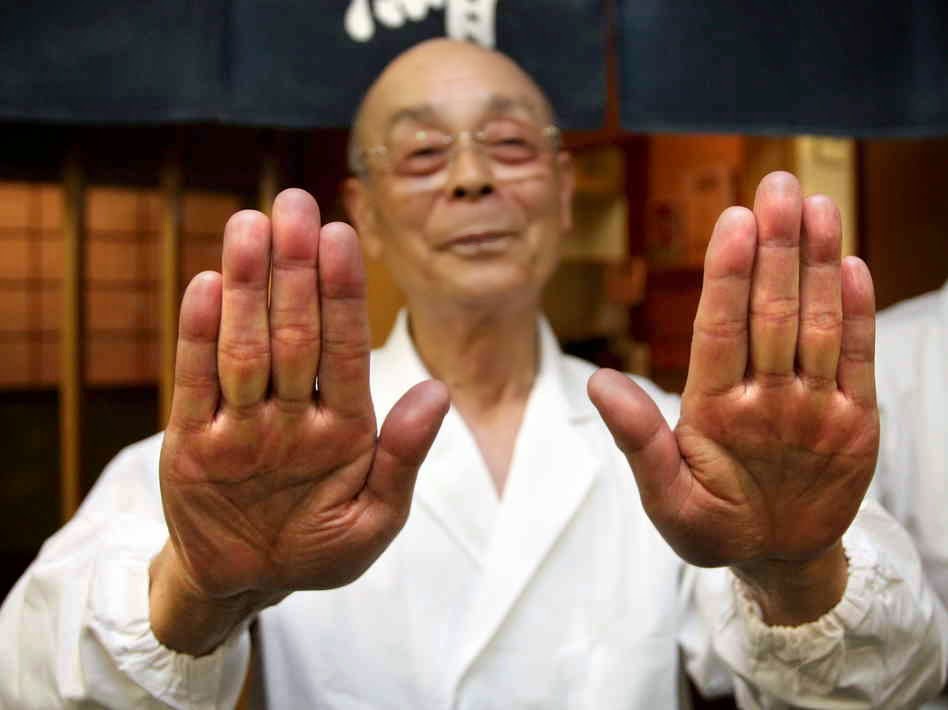 In the basement of a nondescript building opposite the Ginza metro station in Tokyo, sits one of the world’s most exclusive restaurants.  With only 10 seats, no menu, a three month waiting list, and a $400 price tag for a twenty minute meal, Sukiyabashi Jiro is an unlikely source for coaching wisdom.

The proprietor, Jiro Ono, left home at the age of 9, and has been making sushi ever since.  Now 89, he has devoted his life to mastering his craft - a dedication beautifully brought to life in 2011’s Jiro Dreams of Sushi.

Last week, when it popped up on my Netflix ‘suggested for you’ list, little did I know that I would spend the next 82 minutes captivated by not only this brilliantly shot, visually captivating film, but by Jiro himself - a man of rare wisdom.  I have since re-watched it another four times - fearful I may have missed something on previous viewing.

Jiro is an inspiration; there is so much we can learn from this little man, and the film that follows him.

In the opening scene of the film, Jiro offers the following advice:

"Once you decide on your occupation.
You must immerse yourself in your work.
You have to fall in love with your work.
Never complain about your job.
You must dedicate your life to mastering your skill.
That's the secret of success and is the key to being regarded honorably."

Note that he did not imply ‘do what you love’ - but ‘love what you do’.  The distinction is important.  It implies that enjoying your life is an active process.  It does not mean that if you do not love what you do, you quit and find something else you may love.  What he is saying is that - like any relationship - success requires work.  It requires sticking to it when times are tough.  It requires realization of the dedication necessary to succeed.

Such dedication is rare in these impatient days.  But true mastery is not available to the impatient. True mastery can’t be found in a Tim Ferriss book.  True mastery takes a lifetime…

People all over the world travel to Ginza solely to visit this 3 Michelin star restaurant.  That only serves sushi.

Jiro does one thing.  He makes sushi.   No special rolls.  No appetizers.  And no sashimi.  Instead, he serves each person a daily menu of about 20 pieces of fish sitting atop of 2 inches of rice.  Placing it alone in the middle of a black plate, he serves each piece one at a time.  Each forced to stand on its own merits. 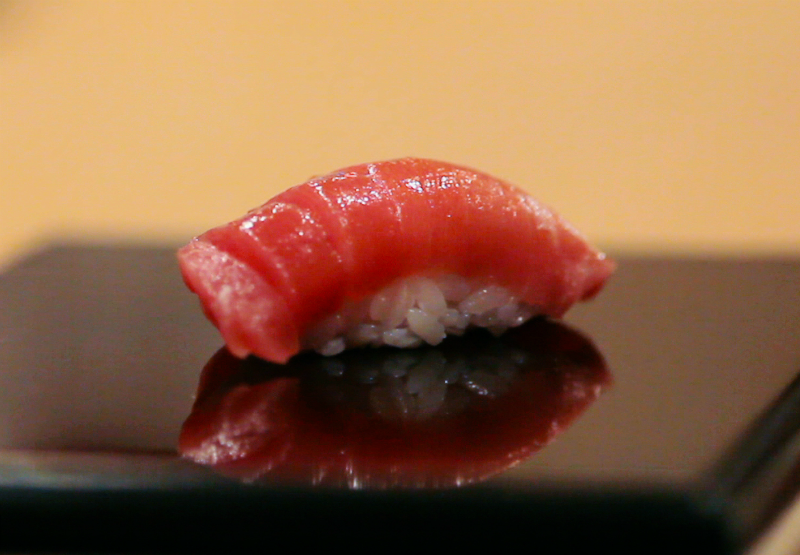 To become a master at something, we must be comfortable with the mundane.  We must fall in love with the tedious. Repetition means just that:  Repetition.  This focus for Jiro goes beyond his work: he repeats the same routine every day - even down to standing at the same spot when waiting for  the train.

“The techniques we use are no big secret. It really comes down to making an effort and repeating the same thing everyday….we do the same thing over and over, improving bit by bit.  There is always yearning to achieve more.”
- Yoshikazu - Jiro’s oldest son

“I don’t like days away from what I love.”

Jiro doesn’t take holidays.  He shows up every day.  Jiro was given a special award by the Japanese government.  He went to the award ceremony during the day and was back at work that same evening.  Apparently, he got tired of sitting around.

Nakazawa - Jiro’s apprentice - spoke about being tasked in making the egg sushi.  Attempting up to 4 per day for months, each one was rejected by Jiro.   When he finally made a good one, and met Jiro’s approval, he was so happy he cried.  And soon after, when Jiro finally called him a shokunin, he was so happy he wanted to throw his fist in the air - right there…”but I tried not to let it show…that’s what you strive for all these years!”

The joy in this young apprentice’s face, his respect for his mentor, and his obvious passion for his craft is inspiring.

“there is much you can’t learn from words.  I have to keep practicing”
- Nakazawa

A discussion between a fish broker at Tsukiji Market and Yoshikazu:
fish broker: “These days the first thing people want is an easy job.
Then, they want lots of free time.
And then, they want lots of money.
But they aren’t thinking of building their skills.
When you work at a place like Jiro’s, you are committing to a trade for life.”

Yoshikazu: “most people can’t keep up with the hard work, and they quit.”

At times, the film seems like it is more about Jiro’s son than it is Jiro.  Yoshikazu is in his 50s.  He works for his father.  And has done so for his entire life.  No family is mentioned.  His one interest outside of sushi is driving his Audi.  In fact, when he was a kid, he was convinced he would become an F1 driver: “yes - I’m crazy…my car can go 300km/hr”, he says day-dreaming…

His devotion is apparent in one scene where he methodically roasts sheets of nori, speaking of the necessity in doing one thing over and over again - until it becomes a part of your being.  And finding peace in this work.  His monologue is eloquent, and detailed.  But he never skips a beat - drumming the nori over the fire at a monotone pace.

Jiro’s all about the process.  To his customer, all they see is the sushi.  To Jiro, what matters most is the experience of making that sushi.

Kaizen is a Japanese term, that roughly translates to improvement, or 'change for the better'.  It is one of process - of continual improvement in technique and practice;  a relentless pursuit of perfection.

It is a term that came to mind while Jiro was discussing massaging the octopus.  Before cooking, Jiro used to massage it for 30 minutes.  Now he massages it for 45 - rendering it even more tender and tasty.

"The masters said that the history of sushi is so long...
that nothing new could be invented.
They may have mastered their craft...
but there's always room for improvement." 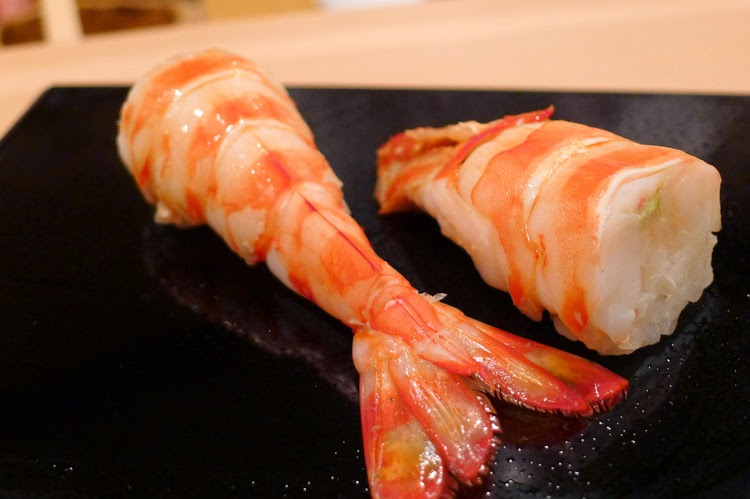 When the film was made, Jiro was 85 years old.  And even after over 70 years of experience, it is obvious he still has a lust for knowledge.  Every day is an opportunity to improve on the one which preceded it.

“I’ll continue to climb, trying to reach the top…but no one knows where the top is.”

It is a theme that is consistent throughout the film, repeated often by various characters

”we are picky about who we sell to. We want customers who appreciate good fish. Even at my age I’m discovering new techniques. But just when you think you know it all, you realize that you're just fooling yourself...then you get depressed.”
- fish vendor at Tsukiji Market

“I would see ideas in my dreams. My mind was bursting with ideas. I would wake up in the middle of the night. In my dreams I would have visions of sushi.”

Posted by Stuart McMillan at 22:07